The Flight of Icarus

The Greek legend of Icarus is a tale of caution. 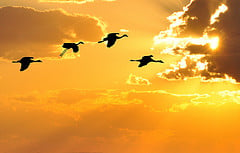 Daedalus was a talented Athenian craftsman who built the Labyrinth for King Minos of Crete to imprison the Minotaur. However, the king imprisoned Daedalus and his son, Icarus, in the Labyrinth as punishment for giving the king’s daughter a ball of string that allowed Theseus to defeat the Minotaur and get out of the Labyrinth. Daedalus designed two pairs of wings, one for him and another set for Icarus. These wings were made of wax and feathers. Daedalus told his son before their first test flight that he should follow him, instructing him to avoid the sea and beware of getting too close to the sun. In a classic example of hubris and failed ambition, Icarus became so excited about the ability to fly that he began to soar higher and higher. With wings made of wax, Icarus soon found that he was only flapping his arms for the wax had all melted away and no feathers remained. He crashed and drowned in the sea that would be named after him, the Icarian Sea. Flying too close to the sun has now become synonymous with hubris and is something to be avoided.


We talked about Jeremy Rowsell, an Australian airplane enthusiast, who is flying over 2600 miles on waste last month. Another attempt at an alternative fuel is being assembled in Silicon Valley. Solar Impulse is another project being worked on that would bring solar power to aviation.

While it may seem far fetched at first, it might not be. Already, the team running the project has completed a number of successful test flights in Switzerland. Tests, however, showed that the structure of the plane would need to be improved when the main wing spar broke during structural tests. This problem has set the team back about a year from their original goal. This meant that the window for ideal weather would close. The team is hoping to circumnavigate the world in 2015 but will be flying the plane across the United States this May.

Those of you who have been in aviation for a long time know that this is not the first solar airplane. The Solar Challenger that flew across the English Channel in 1981 was a single propeller plane. Solar Impulse, however, is a much larger aircraft. The wingspan is similar to that of a jumbo jet but will have a very narrow fuselage, with enough room for only a tiny one-person cockpit. The plane will have four propellers and will need batteries so that the plane can fly through the night.

Harnessing energy from the sun, the plane has about as much power as a motorized scooter, such as a Vespa. This small amount of power allows the plane to cruise at 43 mph. The transcontinental flight will allow the Solar Impulse team to test several different success factors. With such limited power, autopilot will not be an option as it would require too much power weight. Altran, a French company, is in the process of developing a partial system. Limited space means the pilot will not have much room to sleep, stretch, and store food or water – all of which require too much space and weight. Pressurizing the cabin will not an option either, as the team needs to bring oxygen in order to fly high enough to avoid storm clouds. Currently, the jet engine sucks in the air to make it possible but with batteries and the sun powering the plane, the team is using Air Liquid to develop a solar powered system to generate oxygen.