It would be hard to call Leonardo Da Vinci anything 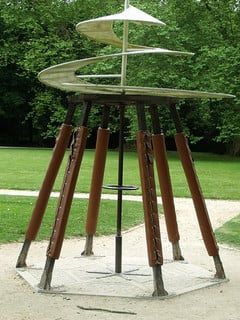 other than a man ahead of his time.  Between 1452 and 1519, Leonardo did just about everything. He is most famous today for his skills as a painter, where he painted some small works- like the Mona Lisa and The Last Supper. His sketches of man were the most anatomically correct to date (The Vitruvian Man). He was also a famed sculptor, musician, architect, anatomist, geologist, cartographer, botanist, writer mathematician, engineer and inventor. He conceptualized things far beyond his time, including concentrated solar power, a calculator, the double hull for ships, a tank and, most interesting to those of us in the aviation industry, a helicopter.

Over 420 years before the first helicopter was built, Leonardo Da Vinci sketched out what he called the Aerial Screw. This aerial screw was a man powered helicopter that required four men to spin cranks fast enough to generate enough lift to get off the ground.

Now, fast forward to 1980, 461 years after Leonardo passed away.  The American Helicopter Society sought to finally see the first human powered helicopter take flight. To win the prize money, which started at $10,000, the helicopter needed to reach at least 3 meters in the air (9.8 feet) for 60 seconds while being stable enough to have the center of the helicopter stay within a 10 x 10 meter box (32.8 x 32.8 feet). It would take 9 years from then before the first human powered helicopter even got off the ground when students at Cal Poly San Luis Obispo got their human powered helicopter 8 inches off the ground for all of 7.1 seconds. In the next 20 years, not much progress would be made so the Sikorsky Aircraft Corporation pledged additional prize money to try to see if that would inspire more innovation.

Sure enough, it did. Two teams, one from the University of Maryland and the other AeroVelo, were locked in a tight race to win. The university of Maryland got their man powered helicopter to fly for 65 seconds but it only reached 8 ft (about 1.8 feet short of where they needed to be) in August of 2012.

Finally, this July in Toronto, Aerovelo took the $250,000 in prize money with this flight:

While we don’t expect to see these Atlas human-powered helicopter’s flying around a city near you soon, this was a remarkable achievement. Congratulations to the Aerovelo team! And, over 480 years later, Leonardo Da Vinci’s vision of a human powered helicopter came to fruition.