Record Number of Flights Cancelled Thanks to Unprecedented Weather 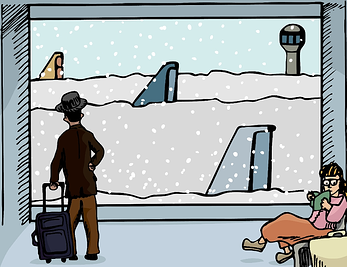 The bad news for the air transportation industry continued through February as more flights were cancelled or delayed due to the unprecedented number of snow and ice storms throughout much of the eastern and northern U.S.

In fact, in the last few weeks, we’ve seen the highest number of flight cancellations in over 25 years. For many in this industry, it’s the first time we’ve seen anything like it.

Since December 1, 2013, there have been a reported 75,000+ domestic flights cancelled. That’s 5.5% of the total 1.37 million flights scheduled; not an insignificant number.

Biggest Record Ever? Who Knows?

The Department of Transportation only started collecting data about cancelled flights in the winter of 1987-88. There’s simply not data from before that, so there’s no way to know how this ranks in the overall history of flight cancellations. But with more airlines flying more frequently these days, we’re willing to bet it ranks in the top 3.

Can We Blame It All on Mother Nature?

Certainly when cities like Atlanta are unprepared for the sheer force of nature that’s been thrown their way recently, we can attribute much of the air transportation issues to the inclement weather. But tighter government and TSA regulations also mean more airlines are quicker to cancel flights to stay compliant, where they might not have cancelled them in the past.

Add to that the fact that planes are packed more tightly to be more profitable and now the flights cancelled due to storms have created a logistics gnarl all over the country. Some passengers have reported waiting days to secure a seat on another flight after theirs was cancelled.

Is the Cost Too High?

Airlines are stuck with floods of flight change requests, and since they typically waive the fee for changing a flight due to a weather-related cancellation, that’s money they’re not earning. If their policy is to offer accommodations or food vouchers, that’s more money out of the airlines’ pockets.

The costs are mounting with these cancellations, and our guess is as good as anyone’s as to whether this might weed out some airlines who can’t compete with the growing monopolies like United and American. SkyWest, for example, recently stated that the storms had cost it $24 million of its pre-tax profit for 2014. This isn’t a major player; the company reported under $100 million in pre-tax profit last year, so this loss is fairly substantial.

The Weather’s Just the Tip of the Iceberg

Speaking of United, in addition to having experienced its own share of flight cancellations, the airline also experienced a reservation system failure mid-February that also affected its flights for the worse. The system outage delayed and cancelled flights for three hours, and then caused 1,600 flights to arrive behind schedule.

Despite the fact that we keep seeing weather occurrences that prove that we’re ill-equipped in some of the nation’s biggest cities to handle them (does Hurricane Katrina ring any bells?), we continue to have to learn this lesson over and over again.

Atlanta, despite receiving relatively little snow from a Wisconsin native’s point of view, completely shut down with the recent “snowpocalypse.” It wasn’t just the airport; people were stranded on the highways as well.

How would this situation have been different with a bit more infrastructure development? Certainly it would be costly to invest in the equipment that would permit planes to fly in the rare snowstorm, but how many billions of dollars would that have saved the air transportation in the first months of 2014? How many passengers could have reached their destinations safely and on time? Isn’t the investment worth the rewards reaped?