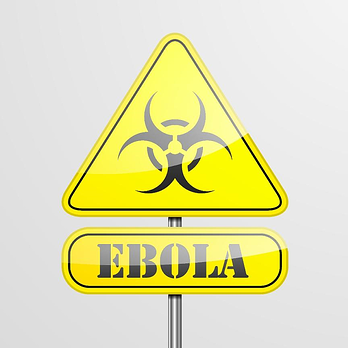 The recent Ebola outbreak has grown to infect people outside the Western African regions where it originated with more than 68 scares here in the United States since the beginning of August. While none of these scares turned out to be real, airline travelers may find they are experiencing increased anxiety about flying as reports continue to surface.

“On the airplane, we are constantly touching stuff that hundreds of other people are touching...” says Brenda Powell, MD, from the Cleveland Clinic. Since Ebola and other communicable diseases can survive outside of bodies for some time, taking simple precautions beyond washing hands can go a long way towards keeping passengers healthy, whether they are worried about Ebola or any other infectious diseases.

Ebola is transmitted through bodily fluids, including sweat, so shuffling through security screening without shoes and socks not only exposes you to fungal infections, but can pose more serious risks. While sandals can be slipped on and off quickly, those worried about contracting an illness may want to find different footwear that allows them to keep their socks on.

While Ebola isn’t known to be airborne, flushing toilets transmits germs into the air, which can expose you to other illnesses that are. Reducing the amount of particulates every flush puts in the air can be as simple as closing the toilet lid before pulling the lever. Create an extra barrier between hands and surfaces by using paper towels.

As mentioned above, Ebola isn’t transmitted through the air, but plenty of other diseases are. If you’re sitting next to someone displaying signs of any illness and you’re concerned, you can always ask to be moved. If this isn’t possible, position the overhead air nozzle to blow straight down on you so you can fill your lungs with unexposed oxygen. Air on flights supply about 190 times more oxygen for each person every minute than can be consumed so use it to dilute any airborne diseases.

If you’re airing down, be sure to drink water. Water will keep you hydrated and will also keep nasal passages moist, which allows them to catch airborne diseases before they can enter the lungs. Sipping water is better than chugging, and steam from hot water can also help keep your nasal passages moist and functioning properly.

Those looking for ways to reduce their interaction with other passengers who might be sick will want to avoid an aisle seat, which exposes them to more direct contact more frequently. In addition to passengers journeying up and down aisles, flight attendants are also brushing past people and touching surfaces that can harbor diseases.

Keep Your Tray Table Up

The Ebola virus can remain viable on surfaces for days. If you’re worried about the disease, avoid the tray table, since it can harbor all sorts of germs. Tray tables may be washed only once a day and a 2007 study found Staphlyococcus aureus (MRSA) on 60% of tray tables.

Bring Your Own Pillow and Blanket

The CDC recommends avoiding porous, reusable surfaces if Ebola is suspected so if you’re worried about contracting the disease on your next flight, bring your own pillow and blanket. Fresh pillows and blankets are only supplied at the beginning of day, after that, they are simply folded and reused.

Ebola is deadly but it’s also easily prevented. Yet if you’re worried, it’s better to reduce your anxiety with a few simple tips that will help keep you healthy than to fly scared, or not at all.