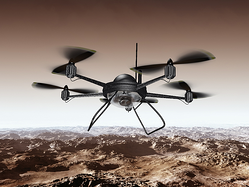 The FAA estimates there will be as many as 7500 drones (aka Unmanned Aerial Vehicles or UAVs) crisscrossing U.S. airspace within the next five years. While some see opportunity, others see mayhem.

In recent months, drones have become a hot topic in both aviation and non-aviation circles. News reports of drone sightings and drone misuse have surfaced in local and national media. Recent announcements by Amazon and Google to use drones as delivery systems have sparked imaginative speculation, and fueled the debate on the appropriate use of drones.

Certainly, the FAA, which is mandated to regulate and maintain airspace safety, has been keeping a wary eye on drone usage for some time. In case you’re thinking the FAA is eager to promote expanded drone use, they’re not. To the contrary, the agency has been curtailing it for years, mainly for safety reasons.

The push for more drone-filled skies is coming from the Executive and Legislative branches of the U.S. government (with a little prodding from private industry).

Three years ago, Congress passed and President Obama signed The Federal Aviation Administration Modernization and Reform Act of 2012 (“FMRA”). The legislation is not only about improving our national airspace and air traffic control (NextGen). Inside this Act is a mandate for the FAA to step up the use of UAVs in the U.S. airspace. FMRA contains real deadlines for developing regulations for airspace use in order to make way for many more unmanned aircraft in our skies by 2015.

The Lawsuit That Led To Defining What A Drone Really Is.

While the FAA sanctioned 6 test sights last year to study the use of drones in National Airspace (mostly large UAVs remotely flown by Air Transport Rated Pilots), what they were not at all prepared for, was the dramatic increase in small quad-copters being flown in densely populated urban areas and in congested airspace. (Note: More than a million of these small, unmanned aircraft have been sold to date worldwide.)

Last year, the FAA issued fines to a number of small drone operators across the United States. Some of operators challenged the fines in local courts. Some courts upheld the FAA fines, while others did not – stating there was no clear law or FAA regulation specific to UAVs in the U.S.

The most noteworthy of these cases involved a Ritewing Zephyr drone conducting a series of maneuvers in and around the University of Virginia campus in Charlottesville, Virginia. The operator was hired to take photographs of the campus, as well as its nearby Medical Center.

The FAA fined the operator for reckless operation, which included flying as low as 10 ft AGL, to as high as 1500 feet AGL. The FAA stated the drone was flown “directly towards an individual standing on a sidewalk causing the individual to take immediate evasive maneuvers.” The FAA also cited that the drone was piloted "through a tunnel containing moving vehicles,” “under a crane,” “below tree-top level over a tree-lined walkway,” “under an elevated pedestrian walkway,” and “within 100 feet of an active heliport.”

The FAA believed it has the jurisdiction to fine the operator. The operator, however, challenged the case in front of a NTSB administrative law judge, who upon reviewing the case, ruled in favor of the operator because he agreed with the operator that the Zephyr was a “model aircraft” to which the FAA regulations (specifically, FAR 91.13(a)) did not apply; and as such, the judged claimed the “FAA has distinguished model aircraft as a class excluded from the definitions of the term ‘aircraft.’”

Not So Fast. Not So Simple.

If the ruling for the Charlottesville drone operator was not challenged, the FAA knew it would be fighting a losing battle in future court cases against small drone operators, leaving it incapable of regulating their use. In the fall of last year, the FAA appealed to the full board of the NTSB. What resulted from their decision paved the way for the current drone operation restrictions issued recently by the FAA.

What The NTSB Decided. How It Reinforced FAA Authority.

The full board of the NTSB reversed and remanded the previous court ruling. In their opinion, the drone used at the University of Virginia was not a model aircraft but an aircraft that met the definition of the FAA’s regulation of FAR 91.13(a). According to the NTSB, the drone was “an aircraft,” which under FAR 91 states: “is any device used for flight in the air.” By defining it as such, the NTSB backed up the FAA’s assertion that the drone was indeed being operated in a careless and reckless manner, and confirmed the FAA’s authority to regulated small drones in U.S. airspace.

The following rules and regulations were recently issued by the FAA for UAVs weighing less than 55 pounds:

These rules do not apply to hobbyists or to model airplanes. The statutory parameters of model aircraft operation are outlined in Section 336 of Public Law 112-95. The following rules are directed at model aircraft users flying for hobby or recreation:

What The FAA Small Drone Rules Mean To Manufacturers And To Commercial Users.

To some, the new rules are more lenient than expected, to others much too restrictive. If you’re a commercial photographer, inspect power lines, use your drone for crop inspection or are a firefighting unit in need of aerial recon, the FAA has surely given you the green light. If you manufacture drones, the rules provide compliance guidelines and help standardize some flight characteristics, such as maximum altitude and speed.

However, if you’re Amazon and you want to use drones as a delivery system, the line of sight regulation is a showstopper you cannot live with and you will no doubt lobby to have it reversed. Amazon has already issued statements bemoaning the fact that the rules constrict commerce. The FAA, on the hand, has left the door open for change by stating they will continue to review UAV operations and will consider changes if developments and technology improve the safety issues.

The good news is there are now in place some orderly regulations for small commercial UAV operators. Apparently, the sky is not the limit for them. For the flying public and for pilots everywhere, this is good news. The new rules protect our airspace as well as the public on the ground and in the air. Now, the FAA has to tell us how they’re going to incorporate large UAVs into our airspace. One thing is clear, whatever kind of drone you’re flying, you had better know where it is, and you had better be aware of what’s around it.