With the rise of legalized marijuana, it’s no surprise that its use is also on the rise. Both the Centers for Disease Control and Prevention (CDC), and the National Institute on Drug Abuse state that marijuana is the “most commonly used illicit drug in the United States." According to a 2015 National Survey on Drug Use and Health, conducted by the National Institute on Drug Abuse, 22.2 million people have used marijuana in the past month. With multiple states approving marijuana for recreational use and many more legalizing it for medicinal use, the laws can be very confusing for employees. The below map, posted by DISA Global Solutions, depicts how each state ranges from fully illegal to fully legal. 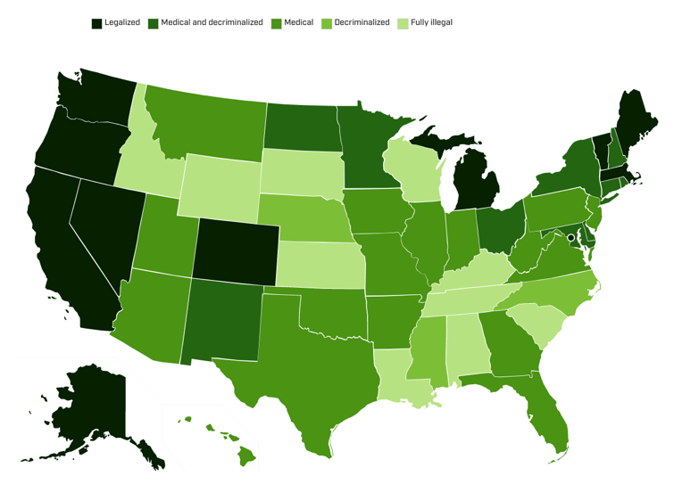 Although an individual may be based in a state that allows marijuana use, employees regulated by the Department of Transportation must abide by federal law to stay compliant. The U.S. Drug Enforcement Agency (DEA) has marijuana classified as a Schedule I substance. This means that marijuana is fully illegal on a federal level and is not permitted for use by any safety-sensitive employee, regardless of the reason for use. Per the DEA, Schedule I drugs, substances or chemicals, are defined as drugs with no currently accepted medical use and a high potential for abuse.

The consequences of drug use by safety-sensitive employees are severe. The employee must immediately be removed from their safety-sensitive function, which can cause a loss of wages, a reduction of workforce for the employer and other business risks. The employee would be required to complete the Return-to-Duty process prior to resuming work in any safety-sensitive role, assuming the company does not have a zero-tolerance policy. This process is extensive and can be quite costly when including the price of a Substance Abuse Professional, completing the required treatment and follow-up testing. A second violation by that regulated employee would permanently preclude him/her from performing that safety-sensitive function.

Combatting marijuana use by safety-sensitive employees is a real struggle across the aviation industry. Unlike alcohol, off-duty use does show up in drug tests, even weeks after initial use. Keeping employees informed of the laws and regulations, as well as clarifying the difference between state laws and federal regulations can help reduce this risk within your company and for the employee. It can also be a sensitive subject when non-regulated employees are not required to follow the same guidelines. State and local laws may prohibit some non-DOT testing that is required for DOT drug and alcohol programs. Explaining these differences to safety-sensitive employees and posting the regulations in common areas can help reduce confusion and keeps everyone on the same page.

Another risk that employees face is accidental consumption of marijuana, particularly in states that have legalized recreational use. It’s as easy as grabbing a brownie while at a party and inadvertently ingesting marijuana. Most edible marijuana products are made into brownies, cookies and candy, which is why it’s imperative regulated employees are educated and avoid any items where the ingredients aren’t listed. Even if the marijuana use is not intentional, an employee would still receive a violation, if they tested positive.

Marijuana use by employees can have safety consequences as well. The National Safety Council (NSC) found that car crashes involving marijuana went up 300 percent between 2010 and 2013, and they continue to rise as more states legalize the drug. Marijuana is 10 to 20 times stronger today than it was in the 1960s and ‘70s. The NSC also found that marijuana use caused decreased productivity, increased worker compensation and unemployment compensation claims, high turnover and lawsuits. According to a study posted by the National Institute on Drug Abuse, employees who tested positive for marijuana on a pre-employment urine drug test had 55 percent more industrial accidents, 85 percent more injuries, and 75 percent greater absenteeism compared to employees who tested negative.

Per the CDC, 1 in 10 marijuana users will become addicted. For individuals that began using marijuana younger than 18 years old, 1 in 6 become addicted. A fatal dose of marijuana is unlikely, but overuse can cause a list of issues including extreme confusion, anxiety, panic, increased blood pressure, severe nausea or vomiting, paranoia, and delusions or hallucinations. These types of reactions can lead to increased accidents like a car crash or fall.

If an employee is struggling with addiction and needs assistance, many resources are available to assist them on the road to recovery. The Substance Abuse Treatment Locator is just one option when finding a treatment option in their area.