Safety vs. Security: Is there a difference?

Safety…security: they sound like they are the same thing, right? After all, they both work with the purpose of protecting someone or something from harm. So why are safety and security separated with respect to government authority and oversight?

The primary answer lies in the events surrounding the attacks in New York City, Washington, D.C., and Shanksville, Pennsylvania, on Sept 11, 2001. Prior to that time, aviation safety and security were the responsibility of just one government authority – the Federal Aviation Administration (FAA).

Today, the FAA’s role is to prevent accidents or incidents involving aircraft caused by man-made errors, inclement weather conditions, mechanical malfunctions and system failures. To achieve this, the FAA performs the following functions:

Standards and regulations established by the FAA include the Pilot Records Improvement Act (PRIA) for good hiring decisions; the Anti-Drug and Alcohol Misuse Prevention program for ensuring pilots are in their ‘right mind’; and duty-time limits, which prevents exhausted pilots from flying.

The FAA has also established airworthiness directives, which every aircraft owner and pilot must follow. This includes the requirement to register the aircraft with the FAA, providing notice if the aircraft has been exported or sold, and reporting when the aircraft is no longer operable. The agency needs this information to ensure poorly maintained aircraft, or aircraft with serious mechanical issues, are not flying. If an owner is non-compliant, the FAA may decide to revoke the aircraft’s registration as a protective measure for the safety of other aircraft operators and the public.

Just as important as a well-maintained aircraft, a pilot’s health, training and mental capacity is vital to the overall safety of the aviation industry. The FAA is also responsible for setting training requirements, evaluating a pilot’s physical health and issuing aviation-specific certificates. If a complaint has been filed against a pilot, the agency is empowered to investigate the allegations and take necessary actions, which might include suspending or revoking their pilot’s license/certificate.

As part of its jurisdiction over operators, the FAA conducts audits and may issue hefty fines, revoke the operator’s airline certificate or take other disciplinary action for noncompliance. In cases where aircraft has been used for drug-trafficking or other illegal operations, FAA officials are empowered with the right to seize the aircraft. The agency’s mission is to “provide the safest, most efficient aerospace system in the world” through safety; integrity; innovation; the quality of its workforce; and by seeking “results that embody professionalism, transparency and accountability.”

Intentionally-caused crashes involving aircraft have occurred since at least the 1930s, according to CNN. These incidents were either caused by firepower from the ground or an explosive device on board the aircraft. The attacks on 9/11, however, changed everything; they revealed the existence of severe weaknesses within America’s infrastructures as well as a realization that terrorist groups would use any means possible to commit violent acts and establish widespread terror. The need for a national security regulatory oversight was clear, and the Transportation Security Administration (TSA) was created with the purpose of protecting transportation systems across the country from such threats.

Those using commercial aircraft for travel see evidence of the TSA’s presence every time they walk through a passenger screening area in a metropolitan airport. Since its creation in November 2001, TSA has taken steps to tighten the security of the aviation industry, which includes the following:

Commercial aviation is not the only sector where new security measures have been implemented. Business and general aviation continues to expand and TSA oversees security programs for certain types of operators. For example, operating an aircraft with a maximum take-off weight of greater than 12,500 (although certain part of the regulations still state “12,5 or greater”, and those that want to land at certain airports, such as the Ronald Reagan Washington National Airport (DCA).

The contents of an operator’s security program(s) are limited to only individuals with an operational and bona fide need to know; therefore, each role within the program receives customized training to ensure they understand their responsibilities. Still, ensuring security, like safety, is everyone’s responsibility, regardless of their role.

Have these safety and security measures gone too far?

Personal privacy is considered a constitutional right, protected by the Fourth Amendment (unwarranted searches and seizures). Today, many people believe the steps taken by the government to protect the air traffic system are violating that amendment. Stories abound of passengers who allege they were groped during physical pat downs and humiliated by the virtual stripping technology of the new body imaging scans. Some claim they were submitted to a full strip search. Objections were voiced in March 2017 when TSA initiated a new policy of conducting an even deeper physical examination of passengers and airport employees who are retained for a pat down – the TSA did not disclose what that examination involves, citing security reasons. 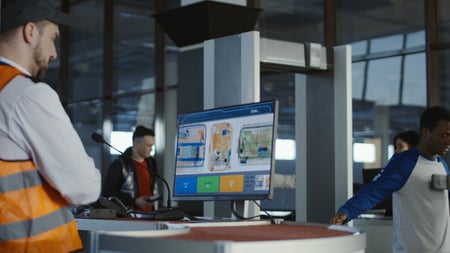 What most travelers are unaware of is that the Fourth Amendment does not apply to searches conducted in airports, due to a 1973 decision by the United States Courts for the Ninth Circuit. In its opinion, the court wrote it considers airport searches to be administrative searches, which are in place to “prevent the carrying of weapons or explosives aboard aircraft, and thereby to prevent hijackings.” The court also wrote searches should be “no more extensive nor intensive than necessary” and that flying is a choice. By choosing to fly, people are essentially consenting to submit to whatever search deemed necessary, whether it be commercial, private, business, or general aviation.

No one likes feeling they are under a microscope – passengers, pilots, employees or operators, but the reality is these safety and security measures are a necessity in a dynamic environment that faces ongoing threat – whether insider or outside. The FAA’s safety standards and rules stop unworthy pilots from flying and keep faulty aircraft on the ground, while TSA’s role is to establish methods that strengthen the security of our infrastructure. Together, these two regulatory bodies enable the aviation industry to keep flying.