In celebration of the Independence Day 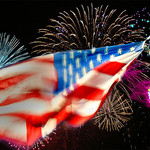 Many of the founding fathers understood the importance of the day, including future president John Adams who wrote to his wife:

The second day of July, 1776 will be the most memorable epoch in the history of America.I am apt to believe that it will be celebrated by succeeding generations as the great anniversary festival... It ought to be solemnized with pomp and parade, with shows, games, sports, guns, bells, bonfires and illuminations, from one end of this continent to the other, from this time forward forever more.

While John was off by two days (He was citing the day the resolution of independence was approved by the continental Congress, instead of the date shown on the Declaration, which would go on to be much more publicized) but beyond that, his prediction seems to be spot on.

We want to wish you, your family and friends a safe and happy 4th of July!