NATA Compliance hosts a free one-hour live webinar for all Drug Program Managers every first business day of the month.

This is a reminder that March 15, 2015 is the deadline for DOT/FAA Annual MIS Reporting for calendar year 2014.

Government Shutdown: What to Expect

2013 has been a budgetary year to remember for aviation. Granted, so far, those reasons have been anything but positive. We started with sequestration in the beginning of the year threatening to shut down 238 air traffic control towers, cause lengthy delays at airport security and even kept any branch of service from preforming at air shows around the country. Now, only seven months later, we are met with another budgetary concern; the government shutdown. We have taken a look at what will be suspended and what will continue to operate to try to help you plan with as much care as possible.

On July 15, 2013, The FAA's Drug Abatement Division published a Final Rule entitled "Combined Drug and Alcohol Testing Programs". Check it out on their website here. 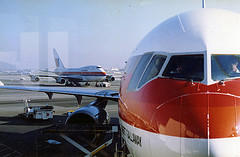 This month, the FAA published a Final Rule regarding airline transport pilot (ATP) certificates and training, titled Pilot Certification and Qualification Requirements for Air Carrier Operations. While the final rule itself is 58 pages long, this blog post breaks down the main components of the rule and to whom it applies.

Following the Impacts of Sequestration

Last month, we talked about sequestration as things were just getting started. In the last few weeks, we have seen some new stories develop as well as some details come into the light. As promised, we have continued to monitor these stories and here is what we have found.

Looking to use a contract instructor or a contract check airman in your training program? This month, the FAA released a new InFO (Information for Operators) regarding those individuals and developed information that can help you meet those requirements.

How does an employer go about changing a DOT test to a non-DOT test when the employer discovers after receiving a verified test result that a Federal Drug Testing Custody and Control Form (CCF) was used for a non-DOT test?